Most clinics today use oil to cover embryo culture dishes in order to maintain stable temperature, osmolality and pH. The quality of oil plays a very important role for IVF success. The oil types commonly used are mineral oil, paraffin oil or a mixture of both these, as well as a light or heavy oil.

In this webinar, Nuno Costa-Borges, scientific director at Embryotools, will discuss the importance of working with high quality oil and share his experiences of using light or heavy oil. He will talk about the handling of oil, the consequences of not using enough oil as well as the choice of oil in different culture systems.

This webinar was recorded in January, 2021. 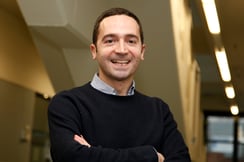 Nuno Costa-Borges is an embryologist that has been involved in both research and clinical practice for over 18 years. As a PhD fellow of the Portuguese national funding agency for science (FCT), Nuno spent several years developing strategies to improve the efficiency of animal cloning, having accomplished the first animals successfully cloned in Spain in 2009.

After finishing his PhD at the University Autonomous of Barcelona, he joined the embryology team of IVI Barcelona, where he has worked as a clinical embryologist. Later on, he cofounded Embryotools, where he has been devoted on offering QC tests, training and consulting services to the IVF community worldwide. Additionally, as scientific director of Embryotools, Nuno has also been committed to the development of new IVF techniques, such as, the flicking method for the biopsy of blastocysts or the maternal spindle transfer technique to prevent the transmission of mitochondrial diseases or to treat infertility problems related to poor oocyte quality as alternatives to conventional oocyte donation
programs.

Nuno’s work has led to several peer-reviewed publications and he has been invited speaker in numerous international conferences and scientific meetings, as well as, awarded with prestigious prizes and grants. Stands out two recent awards, the congress PaperPrize of the American Society of Reproductive Medicine (ASRM) in 2017 and the IVI foundation award in 2019.

Nuno has produced the embryos that resulted in the world’s first baby after maternal spindle transfer for infertility.